The race to grow on space….

In May, at Chelsea Flower Show I was really lucky to meet a real astronaut. Here’s a photo of me at the RHS Campaign for School Gardening  exhibition stall, where they launched (like a rocket!) their Rocket Science campaign.

The space team was  interviewed by Newsround; I was too 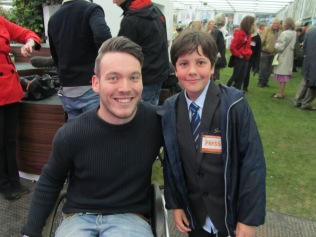 Tim Peake blasts off to the International Space Station in the next few days and is the first British Astronaut, EVER.

In September, the RHS Campaign for School Gardening worked with the UK Space Agency to send 2kg of rocket seed to the International Space Station. When they return to Earth in March 2016, they will send them to up to 10,000 schools to grow as part of their Rocket Science project – if you fancy growing them at your school, check out their website – how cool would that be, to eat rocket leaves grown in space !

Anyone up for a spot of gardening this weekend??