Apologies it’s took me so long to write this blog post; since returning from Mull, I’ve had lots of school exams, I’ve been to RHS Chatsworth Flower Show and I’ve done a fair bit of gardening at home too. 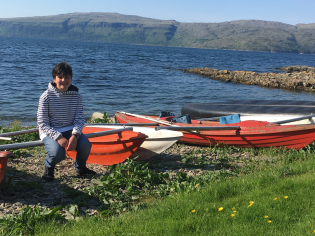 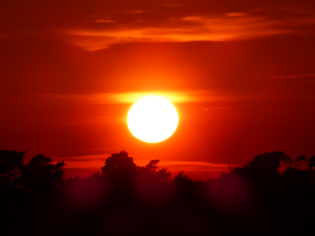 But the biggest reason is…. ‘cos it was so important to me to get it right. I wanted to put a lot of effort in, as the holiday meant so much to me.

**Before I start, I’m mad about wildlife, but I’m no expert, so I’ll hold my hands up if I get something wrong!**

Let’s start with some mammals….

Otters were in my top 3 of wildlife I’d like to see on Mull and I’m thrilled to say we saw them on 3 occasions. The first was when the tide was coming in and one was swimming through the water, then it went on its back eating something, probably a crab. The second time we saw one playing in the shallows in the evening and eating on a rock. The third time we were sitting on a pier thing and there were 2 playing in the distance. We watched them for a long time and had great views as they were swimming along. The midges were really bad that night though; they were like a blanket over our heads, my hands were covered in about 20 midges on both sides.

62 otters have died on roads in Mull in 5 years 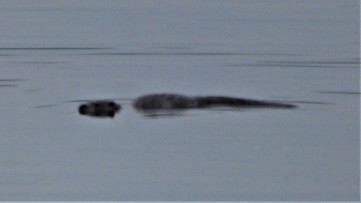 We encountered a hedgehog running across the path on an evening stroll. We got a lovely view as it ran into a bush, then we just let it be.

This mink literally just ran in front of us on the beach as we were sitting down. It ran across the beach and down on the rocks. I understand that they have a bad reputation and cause serious problems for native wildlife, but it’s not their fault as such, they are doing what animals do to survive. I guess it was probably looking for birds eggs and small mammals.

We saw red deer on a few occasions; once at Loch Don in a field, then when we were going to the Mull Eagle watch at Craignure, they were in a field off the side of the road. Apparently there’s thousands of deer on Mull and the poor homeowners have to fence in their gardens to protect their precious plants! We also saw roe deer on the journey and lots of rabbits at the campsite. There were loads of seal bobbing up and down, with 4 spotted at one point.

It’s all about the birds…..

I’ll start with a red breasted merganser; it’s a diving duck, like a goosander, the males have a crazy hairstyle, they have a lovely red bill and dive for fish. I saw them off the coast at the campsite and it’s a new species for me. There were black guillemots at Oban (night before we caught the ferry over to Mull); we saw quite a few of them. A treecreeper – a type of small bird – near Duart castle, which was catching flies. Eider duck another type of marine duck, with a white & black head and a really green intricate complex bill.

We saw loads of buzzards and they fooled me really, ‘cos they’re like a golden eagle. There are tips in how to tell them apart – the length of the tail, size obviously, short wings, whereas golden eagles have longer, darker, flicked wing, but they can be lighter, if they are a juvenile, that’s why it’s so complicated to ID them.

It’s ‘happy hour’ again with housemartins nesting near the campsite and lots of swallows flying around. The hooded crow is a sub-species of the carrion crow and you usually only get them in Scotland; it’s a new and interesting species for me. They are basically a grey and black crow, not a magpie ‘cos you don’t get them on Mull.

Siskin, which is a type of green finch; it’s quite small and a lovely little bird. Gold finches, with their beautiful clown like face, with red, white and black. A cuckoo, which is a really interesting species. Now a lot of people have heard them, but not a lot of people have seen them, but we were actually really lucky to get a decent sighting of them. My Dad had a really good view of 2 together and then me and my Mum were walking and heard one and then saw it in a tree. We heard cuckoos on quite a few occasions over the holiday so there must be a good population on Mull
Sandpipers are a type of common wader and a curlew, with a big curved bill, are the largest wader in Britain. Great spotted woodpecker, the most common woodpecker, with distinct markings; they are quite predatory and they eat larvae. If you’ve been watching Springwatch you may have seen woodpeckers taking chicks out of nests, which is something you don’t expect.
Artic and common terns, like a gull with pointed wings that eat fish. We saw Gannets, when we were on the Calmac Ferry; they are the largest seabird, like a tern, with sharp wings. I think they can dive at 60mph and it’s really amazing watching them dive with their black tips on the end of their wings and yellow head, it’s really cool
A great northern diver, which is quite an interesting bird, it’s another diving duck, you get them on lochs and they’re a beautiful black and white duck. Whenever I”ve looked in books it’s very mesmerising the contrast between the black and the white, they are amazing birds. And Linnets which are a sweet little finch.

And now for the eagles…… 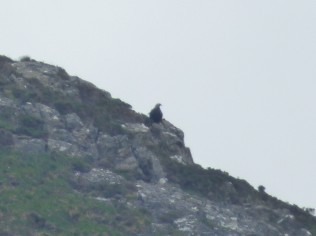 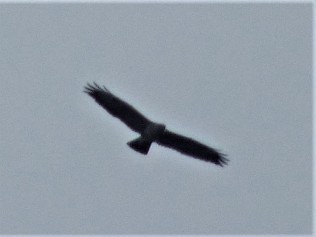 And last, but certainly not least, Mull’s most famous bird, the flying barn door, that is the white tailed sea eagle and I can tell you now, they are the most amazing birds EVER. The first time we saw them was at Loch na Keal; if you’re ever up in Mull, visit it, it’s pretty good. There was a couple of bird watchers and a lady said she’d seen one and there it was, right over the other side of the Loch, perched in a tree. The lady had this amazing telescope and I got a quick view before it flew off and circled ahead.

We had a great experience with the ranger, Cian, on a Mull Eagle Watch at Craignure Golf Club, but sadly they didn’t make an appearance that day. We had a great time and Cian was so knowledgeable about wildlife in general that it almost didn’t matter!

The next day, as we were driving through Tiroran, we saw a couple of people with telescopes; we stopped and had a chat and then this massive and I mean massive bird came gliding down into the nest with its wings folded into like a W shape and it was one of them moments where that couldn’t be anything else but a white tailed sea eagle. It flew across the valley and I  got a lovely view of it’s huge wings – 2.5 metres – and then it soared and soared, it was incredible. The next day we saw another when we were looking for a campsite. One flew into some trees, flying upwards from Loch na Keal. 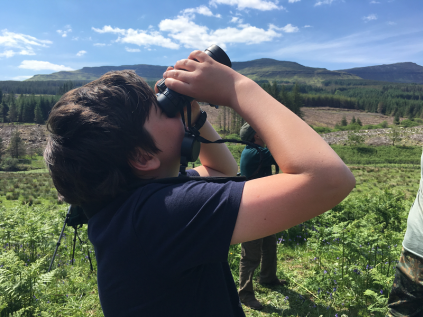 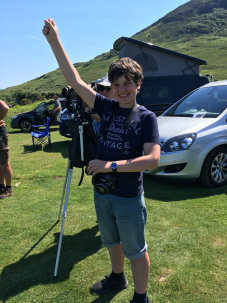 **Not our photo** Taken from the Mull Eagle Watch Twitter site

Just to say, many of the birds we saw you would generally only be able to see in the north of the country e.g. black guillemots, eiders, divers, although some will migrate south in winter.

A note about the landscape – the scenery is pretty superb, we went on some cracking road trips along the single track roads. We had a great bike ride to Duart castle, which is on the coast and has a spectacular setting.  The walks, the mountains, the coast are all fantastic – in fact I have to say, being pitched right on the coast at Craignure and getting up and sitting outside and looking at the views, watching the Calmac ferry sail back and to, skimming stones, having a dip in the freezing water, earns it my fav campsite EVER. We also stayed at Fidden Farm, Fionnphort, which was pretty special too. Oh and ‘what’s the story in Balamory, wouldn’t you like to know!‘ – yes we checked out Tobermory too!

Brew with a view 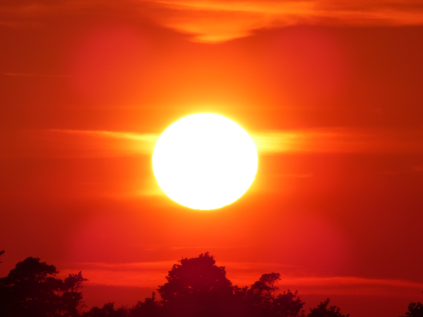 Out on a bike ride – where I tore my legs up – I spotted this really cool roundleaf sundew; I would never have known that you can get native carnivorous growing in the wild if it hadn’t been for Matt at Hampshire Carnivorous Plants. Driving along there are lots of bluebells (which appear later than ours in Manchester). There’s some beautiful bracken, yellow flowering gorse and loads of wild garlic. It looked like a Chelsea Show Garden, the way the beautiful white flowers flowed down the little caverns. Yellow flag iris are everywhere and armeria – which we’ve actually got in our front garden – it’s native to the coast, with a little pom pom flower. It’s a really pretty plant and we noticed it in a tidal river, therefore it must be under water twice a day. 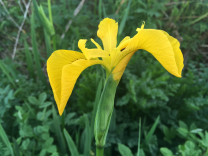 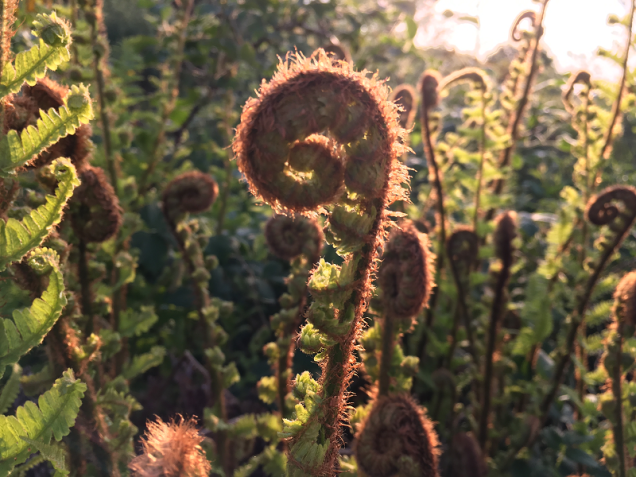 There was plenty of butterflies – green veined, orange white tipped – and moths – cinnabar and ermine. A beautiful red damsel fly and a beetle which we’re not sure of the ID, so if anyone knows what this beetle is please tell us. 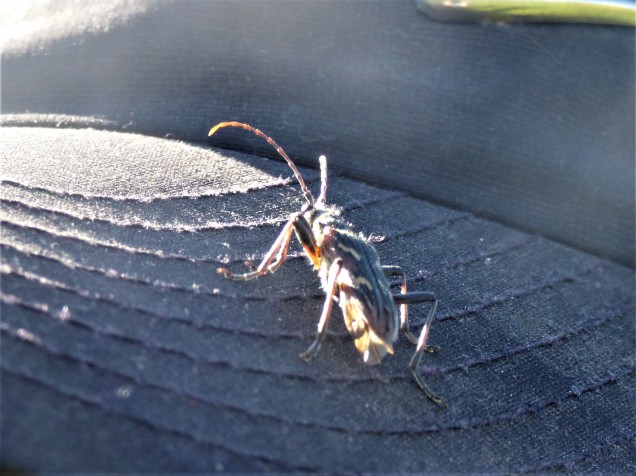 We saw this skeleton, on the side of the road, near the coast. It was stripped clean, the head was missing and it had a tail.

We suspect it was an otter, unless anyone can tell us differently?

Finally, here’s a short YouTube video of some film footage we took – enjoy.

**Please note they aren’t highland cattle, as stated in the video**

Mull was rather marvellous and it will be one of those memorable holidays that will stay with me forever. If you don’t believe me, go yourself!