Raptor Watch at #Parkgate was priceless

Me and Elliot Montieth

Me and Findlay Wilde

and blimey our efforts paid off big style, as we were rewarded with a rapturous Raptor Watch!

We arrived at Parkgate at about 12:30pm, as soon as we arrived and got out of the car it all started to kick off, as a male hen harrier swooped in over the marsh and flew into the horizon. After about 10 minutes a marsh harrier glided over the marsh land too. It felt great that after just a short while, I had seen two different types of harrier, one of which I had never seen before.

It was great to hook up with birders, Elliot and Luke again, who I met at the Hoylake High Tide Watch and I also met another young birder called Findlay, who was really friendly and knowledgeable. It was a good job Elliot and Findlay were there as I was so captivated by the harriers and other birds, that I didn’t take any pictures, so, just wanting to thank them for allowing me to use their bird pictures – cheers guys!

The hen harrier is an awesome bird and I feel privileged to have seen it, as its very rare, mainly due to human persecution. They are moorland birds and tend to nest where grouse are hunted. Thank goodness there’s lots of campaigns to protect them, including an RSPB project called Skydancer, which raises awareness and promotes the conservation of hen harriers in the north of England.

I could stay in this position for hours!

Then after about half an hour I had news from Findlay that there was a merlin perched on a stick just over the marsh land. Similarly, I had never seen a merlin before, so that was a great treat. I looked at it through somebody’s telescope and it was beautiful and very uniform. Throughout the day, we kept getting glimpses of marsh harriers and merlins – a ringtail (female and immature) hen harrier came in later – then to finish the day off in style, a handsome male hen harrier swooped in very close, flew slowly over the marshes then twisted down onto the floor and blimey what an exit it was.

There was other birds too including herons, egrets, curlews and lapwings. The day was #Epic I was absolutely buzzin’; after taking part in the Big Garden Birdwatch the day before, it rounded off a fantastic wildlife weekend.

The next Raptor Watch is on 26th February 2017 and I’m hoping to sweet talk my Mum into taking me!

My next blog will be about my Blue Peter Garden Birdwatch, where I got to utter the famous words “here’s one I made earlier!!!”; hoping this is aired on 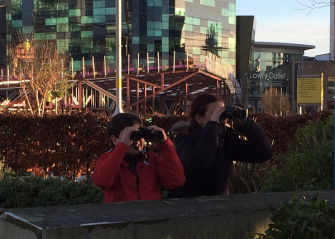 What a wild-life I’m having at the moment. It’s great being a

6 Responses to Raptor Watch at #Parkgate was priceless