The wind of the wingbeat, my wildlife summer blog #WildAboutWildlife

I’ve just returned from a 15-day road trip in our campervan and it was totally awesome. 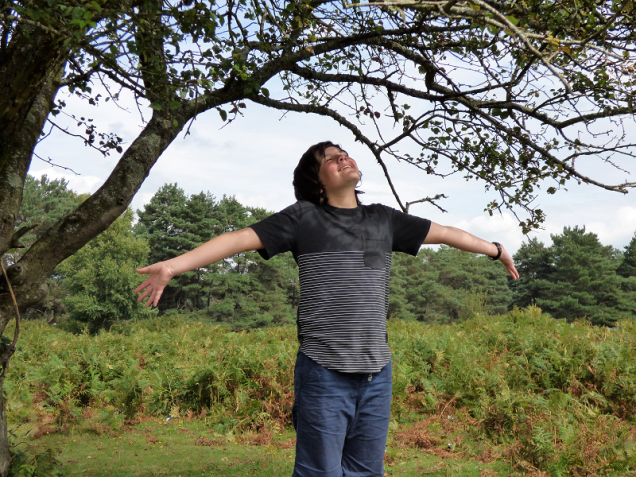 From the start of the journey, when we had a great view of a sparrow hawk, to red kites on the way home, I’ve had an amazing wildlife adventure.

Just before going on holiday I spotted a tweet from Chris Packham, saying he would be at RSPB Arne on the Sunday for Hen Harrier Day – what a stroke of luck, we were camping 2 miles away and intended to go anyway. 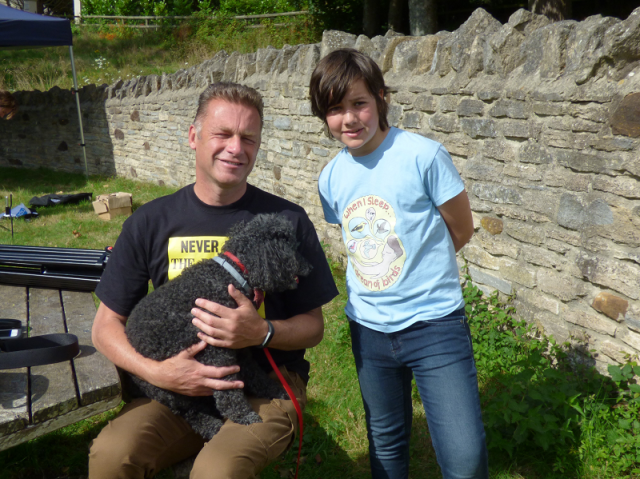 We arrived early for bacon butties at their new café; I was checking out the butterflies in the garden when I spotted the one and only, Chris Packham #MyHero.  Despite meeting loads of celebrities at places like RHS Chelsea I was so nervous to speak to him. I aspire to be like him, as he’s so clever and intelligent about wildlife. My Dad said, “look, it’s a once in a lifetime opportunity, go and talk to him”, so I went up to talk to him about my nightjar experience the night before and he laughed when I said I was called ‘Green Fingered George’. Later, he mentioned me in the speech he gave – saying how he had met a young person earlier who had spotted his first nightjars. What a high, for the start of the holiday!

Now to the serious bit…..why was Chris Packham at RSPB Arne?? Well, it was all about #HenHarrierDay. If you don’t know what hen harriers are…..they are majestic and glorious birds, gliding through the air effortlessly. 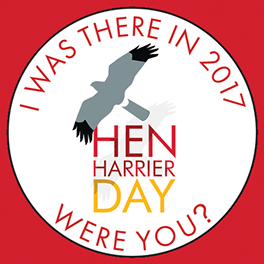 Male hen harriers have a grey and black pattern, whilst the female is brown and I think they are one of the most handsome birds of prey in the British Isles. Unfortunately, they could be gone in the next 5 years as their moorland habitat is within grouse hunting grounds. They are ground nesting birds, which make them vulnerable to danger, such as hunters. Hen harriers are persecuted, as hunters see them as threats as they can eat grouse. Even though it’s illegal to kill hen harriers, it still happens ‘cos it’s difficult to catch people. Hen harrier day is important as it spreads awareness of hen harriers and the dangers they face. It makes you angry, because people kill them and makes you sad because the population is so low, yet guilty, that it’s humans who are doing this.

The big boss of the RSPB, Chris Corrigan, the police and the Birders Against Wildlife Crime were there too to talk about the threats Hen Harriers face. 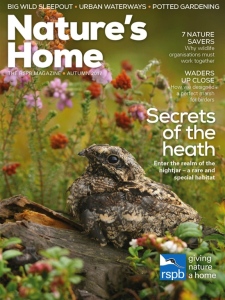 Autumn edition of the RSPB magazine, Nature’s Home showing a nightjar on the front cover

Now let me tell you about that nightjar….My Dad and I were returning from our night bike ride, when Dad stopped as he’d head this sound. I thought it was a pylon, but it wasn’t, it was the classic ‘churring’ sound of a nightjar. I got very excited when my Dad said it could possibly be a nightjar, as he’d just read about them in the Autumn edition of the RSPB magazine, Nature’s Home. After about 2 minutes I saw one fly past, with its sharp pointed wings similar to a hobby. They are quite difficult to spot as they have a grey brown pattern on their back and only come out at night to feed on moths and night insects (similar feeding behaviours to a bat really). Nightjars nest on the grounds of heathland. One way to attract a nightjar – apparently – is to wave a white handerchief, it might not work, but it will make your companion laugh! As we were about to set off back, it was joined by another and there were 2 nightjars flying above our heads #EPIC

What a night ‘cos I also saw loads of sika deer and 6+ green woodpeckers!

On the second evening bike ride, whilst looking for nightjars we came across another nightime hunter; the impressive, ghostly white, barn owl. At first, me and my Dad were looking in opposite directions, Dad into shrubs and me to the open healthland. Earlier on I had rode on to the heathland and was looking about, then I saw this massive white ‘wolf-like’ shape running across the heathland. All manner of things were running through my mind, what is an albino fox for example? I went running to my Dad, before realising it was a husky dog! 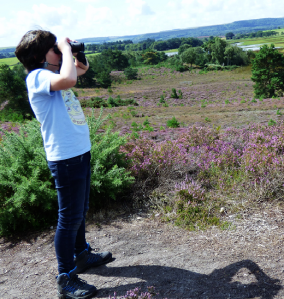 Anyway, I saw this white shape, at first I thought it was the white-wolf again, but it was smaller, so I thought it was a white rabbit, but I noticed it had wings, then I knew it was a barn owl. I shouted “barn owl, barn owl” to my Dad. It rose into the air to show its incredible angel like wings and large head and glided silently away into the dark.

On our 3rd evening bike ride we went to the same nightjar spot and bats were flying around us. One flew past about 3″ from my face and I could feel the ‘wind of the wingbeat’, which was where the title of this blog come from ‘cos when I described it to my Mum, she thought it sounded ‘rather poetic’!

Other birds we saw 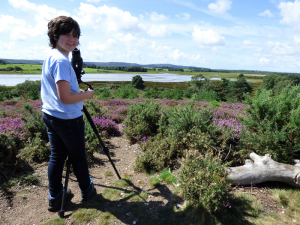 The famous spoonbills at RSPB Arne, on the Wareham River there were lots of waders and reed warblers and over the course of the 15 days (including at the New Forest) there were great views of kestrels, buzzards, green and great spotted woodpeckers, chiffchaffs, chaffinch, goldfinch, greenfinch, stonechat, siskin, nuthatch, redstart, spotted flycatcher, treecreeper, little egret, heron, black tailed godwit, shellduck and a great crested grebe. 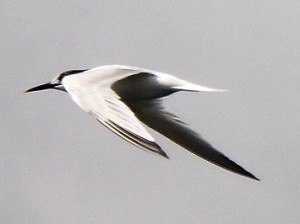 Sandwich tern – we were doing a bit of ‘unsuccessful’ fishing on the jetty in Swanage, when we saw a tern fishing and diving. It was doing a bit better than us, actually scrub that, a lot better than us! We watched it for a while and later looked in our bird book and confirmed it was a sandwich tern with its long, sharp white wings and a black beak with a yellow tip and a black cap (until the end of summer). 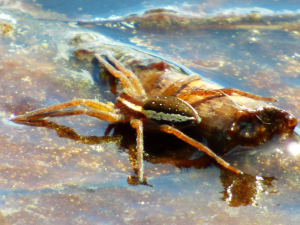 There’s a great pond at RSPB Arne, which attracts raft spiders; they use water to catch their prey and they even dive to hunt water boatmen and beetles #Cool 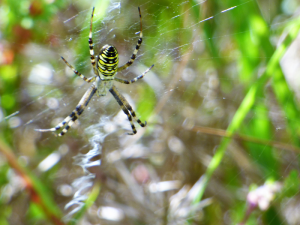 Wasp spiders are a really beautiful species, with their bright orange and yellow colours; they create a white zig zag strip like pattern on their web 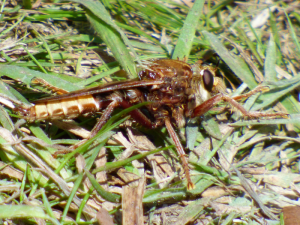 We saw a robberfly too, which hops and flies from one place to another and jumps on insects. It carries the prey away like a robber with a sack of money, then lays its eggs inside so that when they hatch, they eat away at the fly #Gruesome

Big shout out to the RSPB Arne garden which has really come on a lot since last year, when they first created it, attracting loads of butterflies, bees and insects. The bug hotels are fab and they have ponds made from buckets, it could even be a home for frogs and I need to tell you about the café, it does great bacon butties! 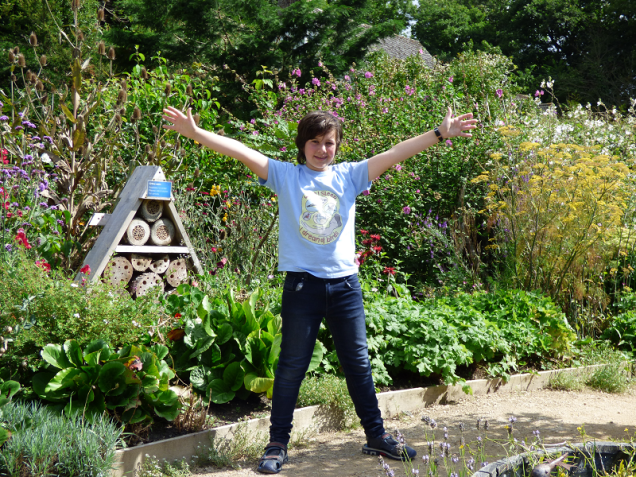 in rain or shine the Arne garden looks divine

Part of my holiday was spent camping with the crazy horses of the New Forest, where daft donkeys eat your magazines and cows that sound like Tom Jones #YEAH. There were plenty of rabbits, squirrels, voles, mice, a fox and, roe/fallow deer too. 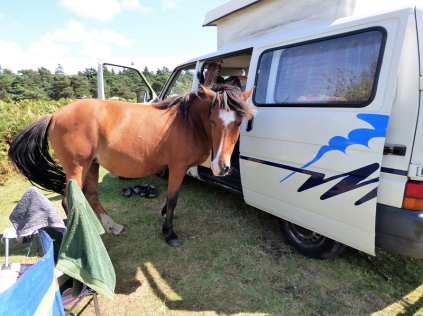 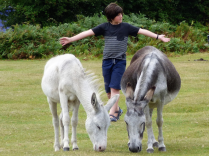 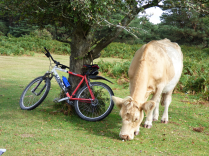 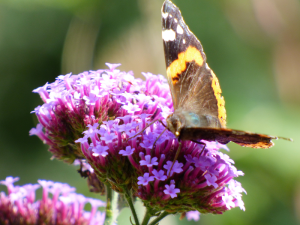 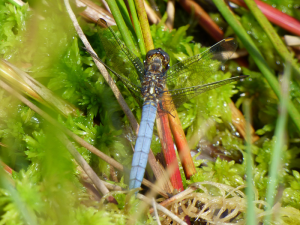 I spent ages trying to get a good photo of a dragon/damselfly – they are well fast! Here’s what I spotted – Blue tailed damselfly, southern hawker, emperor dragonfly, keeled skimmer, ruddy darter 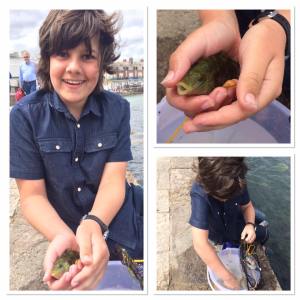 We went crabbing in Swanage, yet all I seemed to bring in was gobies/blemmies (fish that live quite close to shore and generally live on the bottom of rocks) and one beautiful wrasse

On the beach, I was swimming around in the sea, when I stood on the bottom, I felt a sharp pain in my foot. I got out and went to my Dad and showed him my foot and there were 3 puncture wounds. I struggled back to the chair and my foot was hurting like mad. It got worse and I knew I hadn’t cut my foot on stone or glass, so I went to the first aid hut at RNLI and they checked it out and said I was unlucky to have been stung by a weaver fish. They put my foot in hot water for a while and it eventually felt better

I watch a lot of nature programmes and I remember Steve Backshall saying that a lot of people ask him where are the lions, elephants and giraffes in this country? Well, like him I will simply say, that you don’t need to go to the savannah or the rainforest, here in the UK the air is full of amazing birds, the seas are rich with wonderful wildlife and the land is teaming with insects, reptiles and mammals – it’s not called Great Britain for nothing!

15 Responses to The wind of the wingbeat, my wildlife summer blog #WildAboutWildlife