On Monday 22nd May me, my mum and my RHS bestie, Alana went to RHS Chelsea Flower Show, it was…………

If you don’t believe me, watch this cheeky little video I put together!

As an RHS Young Ambassador, the main reason I was there was to film for Newround to try and inspire other kids to get into gardening. The interview went incredibly well and I really enjoyed it.

I was talking to Nigel Dunnett – he’s an RHS Ambassador too – on his Greening Great Britain Garden (which btw was awesome!) when I saw Martin Dougan, the presenter of Newsround arrive. So, I came off the garden to talk to him. After a little chat we got straight onto filming. I chose to film on Chris Beardshaw’s Garden as it was my favourite show garden, the bees were lovin’ it too!

We did a quick run through and practiced the interview questions and just started filming. When I said the line, “Chelsea Flower Show is like the FA Cup Final for gardening” he said it was the best line of the day. Then in about 1 hour it was done, as quickly as that! You can watch an edited version of the clip here: 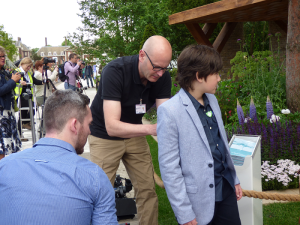 My favourite Main Avenue Show Garden was the one by Chris Beardshaw. I loved the diversity of plants and flowers. I also love the fact that he thought about nature in the design. He obviously used bee-friendly flowers and also a hedge instead of a wall so that birds and mammals could live in it.

This is where I filmed for Newround

I loved the Japanese Garden, Gosho No Niwa No Wall, No War  in the artisan section by Mr Ishihara and I was so honored to be allowed onto it. I loved the water and how it flowed through the garden and under the glass room; it was so tranquil and peaceful . I also loved the traditional Japanese maple trees and how they contrasted with the water and the rest of the garden. Also the garden designer, Mr Ishihara is great. Last year, as he is Japanese we could not understand each other, but fortunately this year there was an interpreter and he said that he remembered me from last year and wanted to pass on “peace, good wishes and fortune from Japan to me in England“! Check this guy out folks, he is #awesome 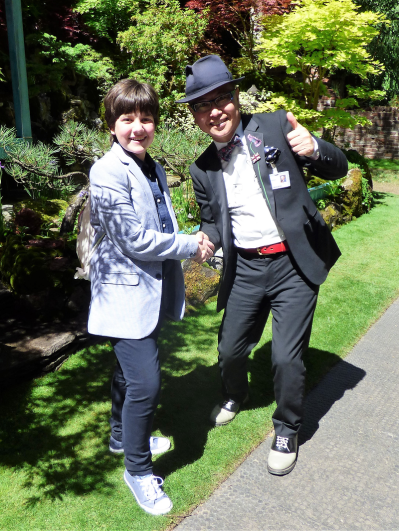 Me and Mr Ishihara – the coolest gardener in town! 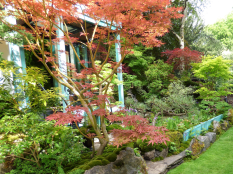 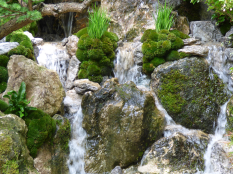 My favourite Fresh Garden was Zoe Ball’s Listening Garden. I loved it as it was very different, as I think it was the first garden that literally vibrated. On the tanks of water you could see how at different frequencies it changed the way the water was moving. Even the ground vibrated and you could feel it beneath your feet. Also the lush green planting was great.

I love the Great Pavilion as it gives you an in-depth look at some traditional and unusual plants, some are even tropical. In the great pavilion my favourite flora I like to look at are cacti, carnivorous plants and bonsai as they are all very unusual. The Great Pavilion is well-great as it brings plants from all over the world under one roof

In the Discovery Zone I chatted to some great people about invasive insects not native to this country that are causing allsorts of problems for gardeners and crops. I was shown this beetle that’s a right nuisance and I told them about catching an American crayfish at the weekend, whilst on scout camp. 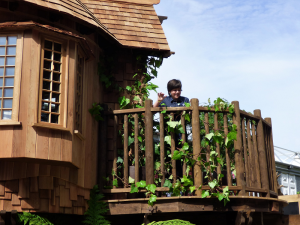 Just outside the Great Pavilion was Blue Forest Treehouses – their Treehouses were the stuff of dreams for kids like me – they were so big and epic they were like the size of my whole garden!

As an RHS Ambassador I was invited to a posh lunch by the RHS President, Sir Nicholas Bacon and it really was POSH ! There was caviar in the starter and I’ve never tried it before and I’m not so sure I’ll be trying it again!

The plane trees of Cheslea Flower Show look great in rain, wind or sunshine, but the seed heads they produce get in your nose, mouth and eyes and give you what is called the ‘Chelsea Cough’ and blimey we all got an attack of the throat!

Some of the celebrities we saw were Dame Judi Dench (I know her, she plays M in James Bond), Deborah Meaden, Brendon Cole, Darcy Bussell and loads of others, like one of my Dad’s favourite actors, Reece Shearsmith. I saw one women when my mum was getting a cup of tea; I said “are you famous” and she went “nah”, so I took a picture of her and showed my mum and she was like, “It’s Joanna Lumley!!!”

I saw all the BBC Chelsea Flower Show presenters Sophie Raworth, Monty Don and Joe Swift; Sophie was really friendly, saying she remembered me from when she interviewed  me 3 years ago and that I’d really grown since then. 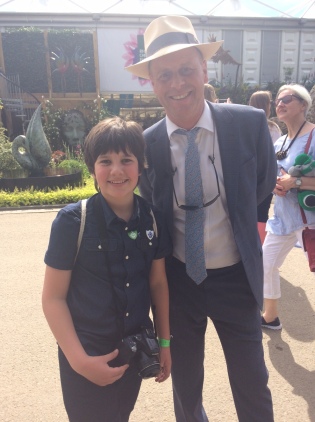 In London there are loads of ringed necked parakeets and obviously as they are so exotic I love them, but blimey they are noisy #Squawk

Other quirky things which are just like around every corner were walking tree men, pandas, stilt walkers dressed head to toe in flowers and a man dressed as a giant tomato! 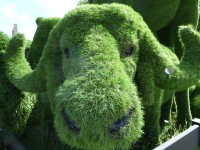 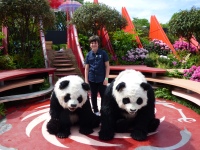 I had a good chat with a lady from Scottish Gardens and she gave me some great tips for my camping trip to Scotland next week. I also had a chat to the man on the RSPB stand; he remembered me from 3 years ago and asked if I was meeting the Queen again! 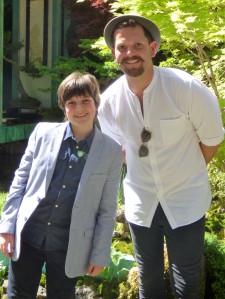 So, I’ve never recorded a live podcast before, so it was great to hook up with Lee from Skinny Jean Gardeners. We met at The Japanese Garden and Mr Ishihara was kind enough to let us both in the glass house to record it there. Lee was super cool and I really enjoyed meeting him. I’ll post the podcast link when it goes live

Did I mention Chelsea Flower Show is like Plant Heaven???

I took 3 million photos of plants & flowers and then edited them myself – that’s something I’ve just learnt to do. So rather than post them all, here’s a video of my favourite

I had the most amazing time at RHS Chelsea Flower Show and I loved being with these two, my mum and Alana – they followed me round, bought me drinks, held my jacket, allowed me to go in the Great Pavilion 200 times and never moaned once – well maybe once, about their aching feet! 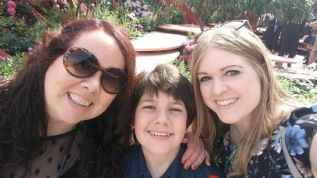 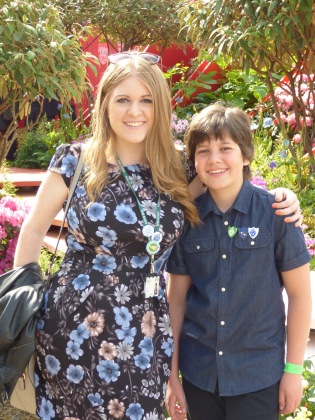 I’d like to dedicate this blog to the people of Manchester; on the most amazing day spent at Chelsea, I returned home to Manchester Piccadilly, some 3 hours later at Manchester Victoria my City was torn apart. Sending my love to all those that have been affected.

5 Responses to #RHSChelsea It’s like the FA Cup for Gardening !!