A wildlife spectacle at a Hoylake High-Tide

It’s all a bit quiet in the garden at the moment, so my blog will be wildlife themed for a few weeks. 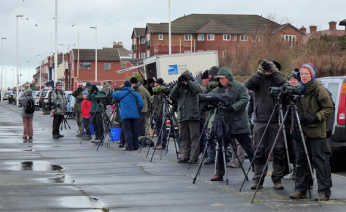 There’s the Big Garden Birdwatch next weekend and here’s my post about the wildlife spectacle of a Hoylake High-Tide.

Me and my Mum & Dad travelled to Hoylake on a freezing cold, windy, winter’s day, that also happened to be my Dad’s birthday. The RSPB trailer and loads of birders (with very flash telescopes, binoculars and cameras) were looking out from the North Parade over the Dee estuary and beach. It was my first Hoylake high-tide and it was great that you can just rock up, get wrapped up and join in! 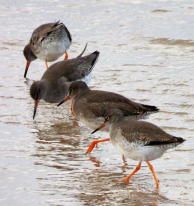 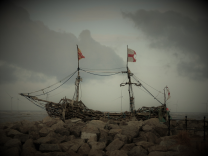 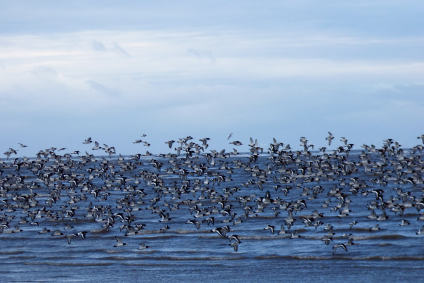 So, what birds did I see at Hoylake

It was an amazing wildlife display, with lots of waders grouping together to make a large flock and then as the tide came in the birds take off in their hundreds, probably thousands actually and because of the high-tide, they came in really close and you get a great view even without using binoculars. The flocks are constantly taking off, twisting and turning and the way the light reflects on their fronts and backs is #OfficiallyAmazing

It felt great to be with other birders as they are all so knowledgeable, but the best thing was meeting young birders, Elliot and Luke, who I’ve been in touch with through social media, but never actually met. Elliot wrote a fantastic account of the day on his blog – Elliot’s Birding Diaries

It feels great to be a part of a group that share the same passion as me, because I have never had the opportunity to be in a birding group especially with people my own age, who I can talk to and have a great time with. As birding is my hobby, I think they will really give me lots of information about birds as they know their stuff.

It was so cold that my Mum barely got out of the car and after 2 hours I couldn’t feel my feet, so we had a flask of coffee, a spot of lunch and headed over to Parkgate to check out the action there.

The landscape at Parkgate is wide with shallow pools and salt marsh that has developed over the years.  The panoramic view is fantastic and it has a lovely village too

At Parkgate, I saw

There’s a raptor watch there on 29th January from 1pm until dusk, which I’m hoping to go to – there’s the chance of seeing hen & marsh harriers, great egrets, merlin, barn owl and my favourite, peregrine falcons. Seeing any one of them would make my day.

The great thing about this area is that you don’t have to travel far to find another cracking nature reserve; so we headed over to RSPB Burton Mere, where the ranger explained the three different areas that make up the landscape – reed beds, woodland and fields. The scrape at Burton Mere was created by shallow holes, which were filled up with water by a farmer.

Even though it was my Dad’s birthday, it felt like my birthday too, because I had such a great time.

Have a great week guys and I hope you manage to take part in the Big Garden Birdwatch too!

3 Responses to A wildlife spectacle at a Hoylake High-Tide