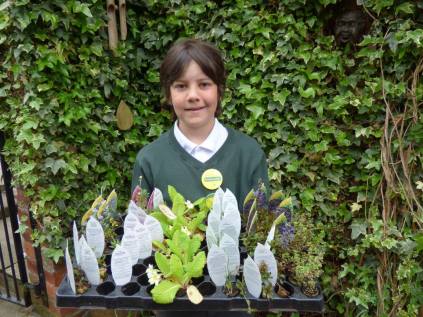 I’m looking back at my gardening highlights this year.

Apart from some clearing up and maintenance, not much happened in the garden in January; although my Dad made a start on building the 3rd raised bed, which increased our veg growing space in the spring and summer.

We enjoyed a fab day wildlife spotting at Brockholes Nature Reserve, where I got the faintest glimpse of a bittern. At school and at home we took part in the Big Garden Birdwatch and I’ll be doing the same again at the end of January 2017.

I did a bit of garden maintenance in February, using my Dad’s new pruning saw. I also helped my Grandma Barbara in her garden, clearing lots of stuff up so she could redesign it and start to think about some new paths and planting areas.

We bought our seed potatoes from Hulme Community Garden Centre, ready to chit in March 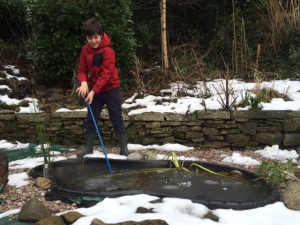 March saw loads of snow fall, which was really great ‘cos school shut! We planted crocus and harvested the last of the leeks and finally started to think of spring planting.

At school, we tested the acidity of the soil and planted a red camellia surrounded by some white azaleas.

In April I went to RHS Harlow Carr for the first time, I loved all the different areas but the kitchen garden takes some beating #amazing

On a sleepover at Grandma Brenda’s I helped her to plant the following seeds – peas, dwarf beans, tomatoes, basil, parsley and cosmos flowers.

At home, some windy weather battered our Magnolia tree. I repotted some herbs for my Mum as she uses a lot in cooking; I used an old colander to plant some mint and sage.

In June I worked on the Blue Peter Garden for the first time, where I planted courgettes, strawberries, runner beans and rosemary. It was #epic

At home, we started brewing some comfrey feed and it STUNK! The comfrey flowers are great for bees and the liquid fertiliser is great for the garden; we used it on our raised beds 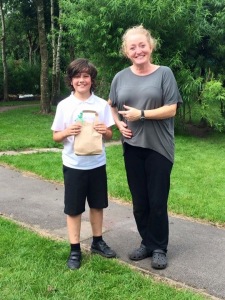 In July, I said goodbye to the (primary) school garden and to my gardening teacher, Sarah – I now call her my crazy mate instead! Without Sarah’s energy and effort there would have been no competition, no ambassadorship and no Green Fingered George – thank goodness, she filled in that form!

I really enjoyed the 2 RHS Flower Shows, Hampton and Tatton, where I spent a bit of pocket money on succulent and carnivorous plants.

At home, our Crocosmia Lucifer was looking beautiful 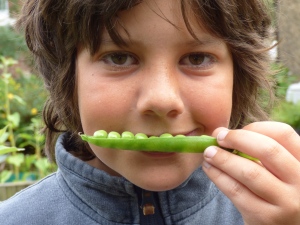 In August I was ‘peesed’ with my garden harvest, picking and eating the veg straight from the plant #Delish The courgettes turned to marrows whilst we were on holiday, at least the blackcurrants tasted just perfect.

I also filmed an interactive clip, updating on the  Blue Peter Garden.

I got to hug a giant redwood at Chatsworth House in September, whilst walking around the outdoor sculpture exhibition.

I got to check out other peoples’ home-grown veggies – rather than my own – as I judged the kids categories at a local horticulture show, where I later had a stall planting the RHS Campaign for School Garden’s rocket seeds #BlastOff

I went all batty in October in my garden at home for the Wild About Gardens Week. In my blog, I talked about how you can encourage more wildlife into your garden.

Another appearance on Blue Peter followed a fantastic trip to RHS Garden Wisley’s Laboratory tour – what a week! 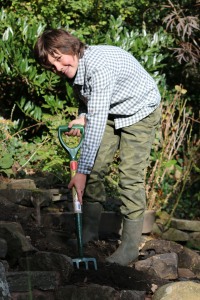 In November I planted some spring bulbs in an area my Dad had cleared just near the pond. This is an area we will be working on in 2017, in particular, the pond which we hope to extend to encourage more wildlife.

I also celebrated one year of blogging with 1000 followers and over 10,000 views #Incredible

The garden took a battering though after a terrible storm – a branch from a Scottish pine tree landed on the leeks, the tray under the bird feeders was trashed, there was stuff everywhere.

I harvested the last of the winter veg in December, in fact the Christmas Day turkey sat cooking on top of one of the leeks!

Over the festive break, we managed to get out and enjoy some fresh air at parks and nature reserves in the area.

For Christmas, I received some lovely gardening and wildlife books, which I will review in the New Year

and I started to think about the growing year ahead….

This is only a snap shot of the year – so much has happened, it’s been #Incredible.

There’s a few things I’m already looking forward to in 2017, including RHS Chatsworth Flower Show – an RHS flower shows at my favourite place in the world = #WinWin .

Quite simply though, I’m just looking forward to getting out into the garden at home, getting stuck in and having lots of fun!