We have had every kind of weather recently

A few Fridays ago, I woke up to snow – not enough for school to be closed – but it was still snowing; I just love messing around in it!

Then, 3 days later the local area was battered by a storm. When my Dad came home from work we went out for a walk to have a look. We walked down to where the river was and it was four times wider than it is normally is and was nearly up to the level of the bridge. It was quite frightening to see it in the dark. We walked down the main road that runs past our house and 2 vehicles were stuck under a bridge in flood water, which was half way up the car. We stood there watching other vehicles trying to sneak past them – they only just made it, creating waves that nearly soaked us – it was fun, in a strange way. Other people had to abandon their vehicles and were walking home. It was one of those nights that you’ll remember forever!

At home the raised beds took a battering, a branch from a Scottish pine tree landed on the leeks, the tray under the bird feeders was trashed, there was stuff everywhere – an empty compost bin had blown across the yard and we lost 6 slates off the roof creating a big hole. Next doors fir tree was snapped in half and the whole place was utter destruction. 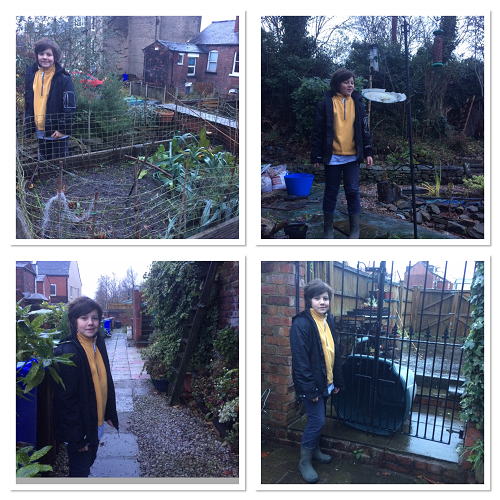 A week later my Mum and I travelled to Buxton and it was glorious blue sky when we left and when we arrived in Buxton it was full of fog and was freezing! We went for a walk in the woods and captured this eerie picture – looks like a scene from a Harry Potter film!

In my home garden

Despite the raised beds getting a hammering, the leeks have survived and today I pulled a few up for one of my favourite dishes my Mum makes – chicken, leek and bacon in a mustard sauce; if you want the recipe send me your email – it’s delicious!!!

Here’s some winter jobs to do in the garden from the RHS website – harvesting leeks is in at number 6 !

It’s great that you can still harvest veggies in the depths of winter. We still have some chard and kale growing – do you have anything in your garden? Anyone growing sprouts? I try one every year, but I still don’t like them! We also grew some wonky parsnips – they still taste the same as straight ones !!! 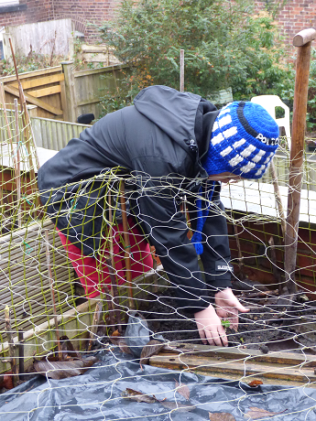 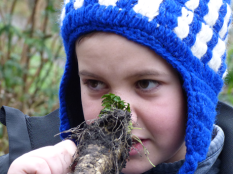 My Mum was given a dahlia for her birthday and asked allotmenteer, Roy for advice on what to do with it over winter. Roy certainly knows his stuff and has won awards for his dahlias and chrysanthemums. There’s some great advice here from the RHS website about protecting plants, growing veg, looking after wildlife and pruning over winter – I’ve met some of the team and they are #PlantSavvy!

Update from the RHS Campaign for School Gardening

Hope you have a good few days and avoid the Christmas madness!