Herbarium Heaven, As I Go Behind The Scenes at RHS Garden Wisley’s Laboratory

Last week I was invited to the RHS Garden Wisley Laboratory, for a behind the scenes tour to find out more about gardening science. 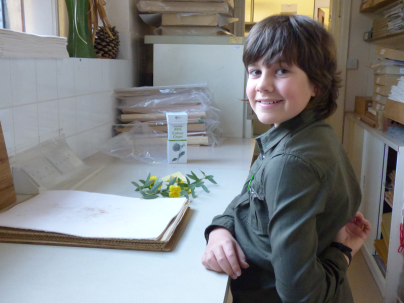 It was absolutely fantastic, as I really love science #Epic

I had the best tour guide, Yvette Harvey, the Keeper of the Herbarium at RHS Garden Wisley #WickedJobTitle!  she was so knowledgeable, generous with her time and almost as giddy as me! 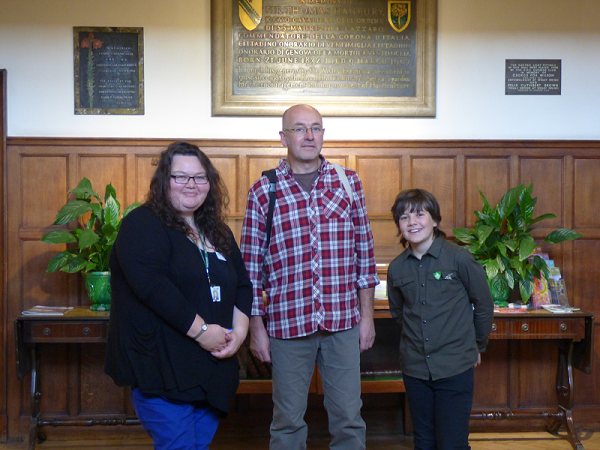 The RHS Entomologists focus on all animal life found in gardens, not just insects, carrying out research and providing advice. This helps gardeners make informed choices about plant selection and pest control.

Dr Bird talked about her job – at the moment she is looking at plant health and pollinating insects – important subjects for us gardeners!

Dr Jones talked about ‘the bugs’ and let me handle a Madagascan Hissing Cockroach – it was calm, until it jumped out of my hand!!

The room was full of drawers of bugs and beetles, beautifully preserved and set out really neatly. There was this really distinctive smell; I thought it was very musty 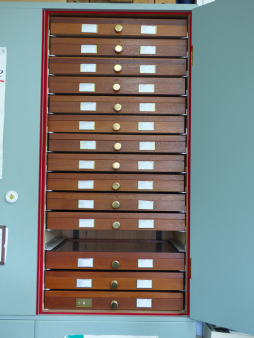 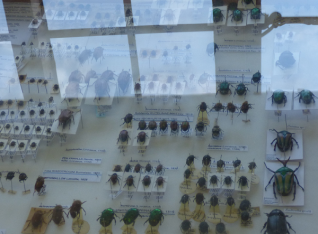 Next door was Esther McMillan and her team in Advisory, which is a great service for RHS members who need advice with indoor plants, pests, shrubs or anything in their garden really. People get in touch via email or telephone to talk about their garden problems, I think it’s a good facility to have and they told me they deal with thousands of enquiries every year. It’s a good thing to have ‘cos it’s nice to know that people can answer gardening questions that you’re not sure about

Next stop was meeting Debbie Hodgson in the science library, which

again it had a distinctive smell – probably of old paper!

It is the oldest RHS Library collection  and besides books it had all these quirky things too, like this original wages briefcase – can you imagine carrying that around with everybody’s wages in today!! There was this copper cylinder that was used in a 1916/7 experiment on daffodils and a plant hunting box from c. 1918. I just love things like this they are so cool.

Debbie showed us a selection of books that I think she knew would ‘float my boat’. There was this book with this drawing of the Puya chilensis sheep eating plant – that was amazing.  Despite the name the sheep eating plant doesn’t actually eat sheep whole. In its natural habitat it uses its razor sharp spines to snare and trap sheep and other animals, the animals die after being trapped and decay  providing the plant with the grisly equivalent of a bag of fertiliser. Something else that isn’t it!

There was a book made of the RHS’s John Lindley’s proofs of the last four volumes of John Sibthorp’s Flora Graeca.  This project was started in the late 1700s with the help of the artist Ferdinand Bauer. Eventually it was finished in 1840 . It was the most expensive book ever published; in today’s terms, it would have been £6 million #SeriousBookBling! The book was huge and there are 10 volumes with only 25 sets being printed. It was a very, very big book and there was nothing pocket size about it!  Later in the herbarium we saw a specimen of Aristolochia that was collected by Sibthorp and features in the book.

Here I am checking out the boss’s chair – Dr Alistair Griffiths, he’s the Director of Science & Collections at the RHS. Just like Goldilocks, I sat in his chair and ate his porridge!!! #Joking

Dr Rebekah Robinson & Dr Kálmán Könyves (serious white coated scientist, busy doing Wisteria DNA extractions) met me in Pathology and we had a chat about plant diseases – people send in samples of their plant problems; pathology carry out experiments on it and then tell them what the problem is. The most common one is honey fungus.

Plant pathology is the science of plant diseases that either kill or reduce the ability of a plant to survive, produce flowers or fruit. They are caused by micro-organisms normally referred to as pathogens; which include fungi, bacteria and viruses.

Dr Robinson set up a really cool experiment and showed me how to identify the fungus box blight from a sample that had been sent in by an RHS member. First of all you dampen it to allow fungus to grow by keeping it in a plastic box for a while with damp tissue paper. Then we made a microscope slide with a blue liquid (methyl blue stain) so we could see the spores of the fungus. It was really good fun, I enjoyed looking at the box blight itself on the computer screen – that was really interesting and the equipment was very hi tech #SuperCool

Dr Robinson said that recently the science team had discovered a new midge not known to science – how amazing is that! 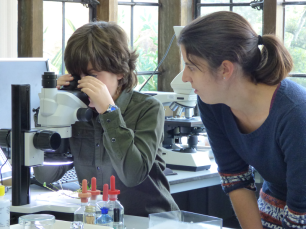 I met Gill Skelton & Debbie Chubb in Plant Records, where we did an ‘accession’, which is ‘logging new plants’. I had a go and Gill was very patient cos I’m not great at computers – here’s my entry. I also printed some plant identity labels that go in the garden 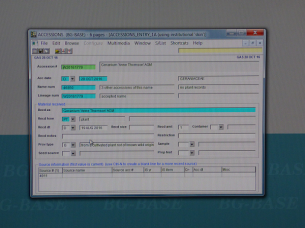 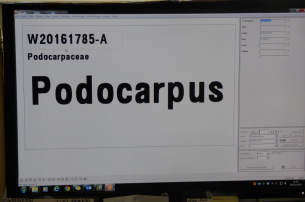 And finally, Yvette took me to her ‘favourite bit’ the Herbarium. She had laid out some great examples of the team’s work and I could tell she had put a lot of thought into it. Before I went on the tour I didn’t know what a herbarium was!! Now, I’m #WellSavvy

A herbarium is a collection of preserved plant specimens, which are used for scientific study. Most specimens in a herbarium are pressed, dried plants. These pressed specimens are mounted on sheets of card and stored in flat folders in banks of cupboards following a logical sequence for easy referral.

There are over 83,000 specimens in the collection and they are currently scanning every single one with a very flash high-resolution camera; eventually they will all be available online

The RHS Herbarium is the largest herbarium dedicated to ornamental plants in the UK and dates from 1917, although the oldest specimen in the collection is a lavender from 1731 #Wow

There was this really interesting info and old photos of George Forrest, who had collected over 30,000 specimens from China. I love the photo of the local collectors with the plant presses.

Yvette told us how each herbarium has a code and that Wisley’s is WSY – she also said they have one at Manchester University and that their code is MANCH – I didn’t know there was one so local to me.

I thought you could easily tell the ones that had been pressed recently, ‘cos the colours were stronger than the older ones. They were all stored in these vast cabinets, I can’t believe the how many there were.

Yvette had got a collection out called Dracula, very appropriate for just near Hallowe’en and there was one called Gazania ‘George’ too (an aster/daisy). 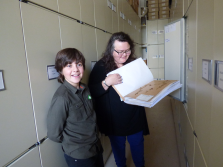 It was great to meet Rosalind Marshall, one of the RHS’s botanists, who was putting the final edits to a new RHS book on ivy. The detail was incredible and it was really interesting to see how it is laid out on a computer before it is printed into a book.

I met Mandeep Matharu & Barry Phillips for my final treat of the day, which was to actually press a live specimen, cut fresh from Wisley’s garden – what a privilege. Barry helped me to cut a specimen called, Dendromecon rigida that’s a bush poppy or tree poppy to you and me; we then wrote the following information:

Finally, we carefully wrapped and protected the flower heads, plucked some sample petals and using blotting paper, corrugated paper, pressing plates and straps we placed the flowers in the drying unit where they will stay for a few days.

I wonder what you would do if you wanted to press a Gunnera leaf!!

And a few days later, ta da, here it is. It will join the collection at Wisley. I am now a plant collector and join the ranks of some of the legendary plant collecting giants, including Charles Darwin #OfficiallyAmazing

@The_RHS 's first herbarium collection by @GreenFGeorge – just out of the drier. To be mounted and incorporated in the cabinets next week. pic.twitter.com/vAxBxPuagm

I just loved some of the quirky stuff in the beautiful, old, wood, panelled building – even the ladies toilets had funky locks – yes that’s right Yvette had me looking in the ladies – they were empty at the time though! 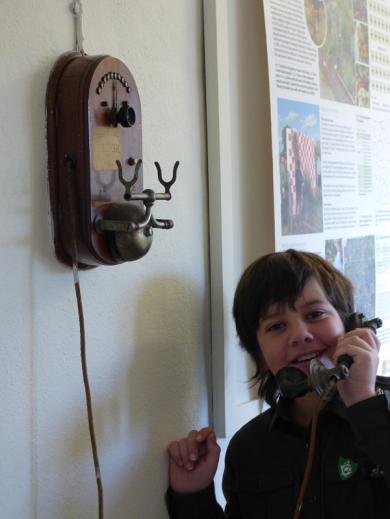 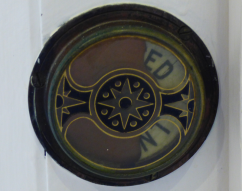 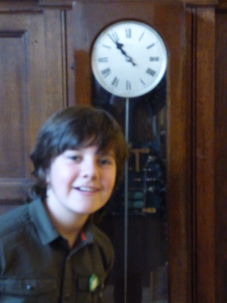 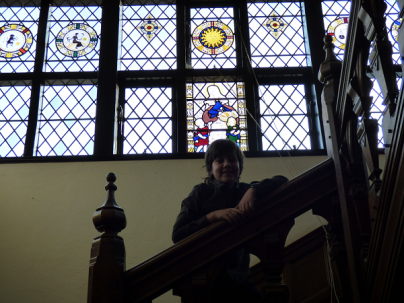 I’ve often talked about the different jobs in horticulture, gardening is not just about cutting grass and planting seeds. My tour has showed me that it’s also about some really cool science. I’d love to return to the laboratory again and my name might be up here one day! 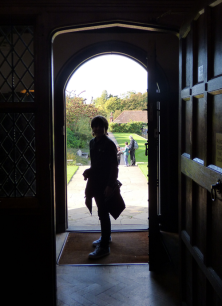 I’d like to say a massive thanks to Yvette for the invite and the wonderful tour, it was really good and I can’t tell you how much I enjoyed it. I’ve also forgot to mention, Liz Bourne in reception – keeper of my coat and an oddly placed sheep!

Next Blog – The glorious autumn colours of RHS Garden Wisley

10 Responses to Herbarium Heaven, As I Go Behind The Scenes at RHS Garden Wisley’s Laboratory