So for my second part of the RHS Ambassador Lunch blog, I want to tell you all about…… 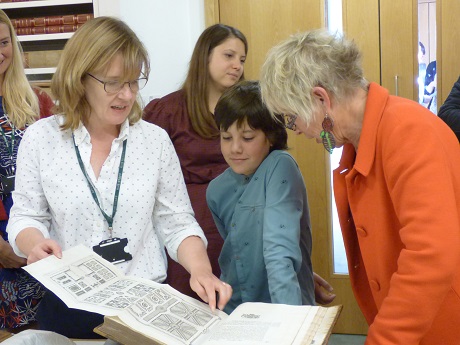 First of all I want to say thanks to Fiona for showing us around, it was fascinating. It felt such a privilege to be given such a brilliant tour and wonderful description of some very special books – it was ‘right up my street’ for sure.

The library holds unique collections of early printed books on gardening, botanical art and photographs. It also holds the archives of the RHS and personal archives of notable gardeners and garden designers 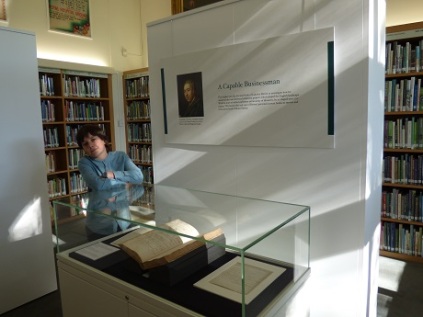 So who was Capability Brown and what exactly did he do? Check out this top cartoon – it should answer all your questions – it’s well good.

All the RHS Ambassadors were invited to look at Capability Brown’s Account Book, you can read more about it here. His account book shows a man who knew where his dosh was at. In today’s terms, his income would have been £500 million with perhaps a third of that being profit; quite simply he earned a lot of money #Loaded!

He was popular and savvy, showing landowners how they could make loads of dosh from their land e.g. planting lots of trees for timber and draining fields for pasture.

During the tour we were able to ask loads of questions; my Mum asked what a “Ha Ha” was? Carol Klein answered and said it was a way of keeping a beautiful view (for the landowner), whilst also being able to keep cattle in a ditch, behind a sunken wall #Genius

Everyone loves a pop up book (especially my Grandma) and there was one by Capability Brown that showed his garden designs – one of the illustrations showed how to stop cattle coming up to your window. 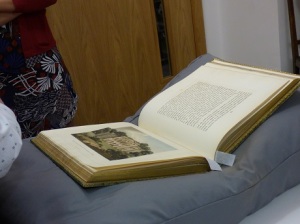 Another book was like a ‘catalogue’ of Capability Brown’s work, which he would have used with customers, saying “you too can have a garden like this”!!

Downstairs in the cool library, we were shown books that Capability Brown would have used for research. There was this beautiful pull out book showing formal French gardens, which all posh people had in those days. 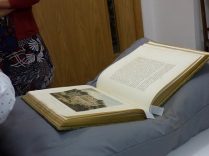 There was a seed catalogue with beautiful illustrations with a special printing technique. This would have been handed out to shop owners; it showed beautiful pictures of fruit and veg like peas, beans and many of the trendy food we have today like kale and chard. 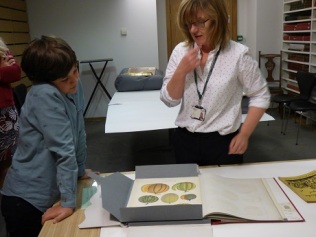 Fiona told us all about how books of a certain period would have been uniquely bound, uniquely printed with a unique interior. The person buying the book would have chosen which pictures they wanted in their book before it was printed and bound.

I’ve seen how they do this design on TV; by pouring milk into a dish, adding ink/food colouring, then swirling it around and putting some paper over the top of it

I loved this RHS ‘The Vegetable Garden Displayed’ book – it was a ‘how to garden’ book, issued during the second world war to encourage people to grow their own to help with the shortage of food. The book was even reprinted in German after the war and distributed there 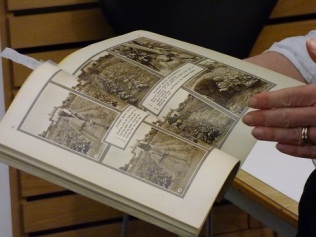 One of the oldest books was The Gardener’s Labyrinth book dated 1586 – so, before Shakespeare wrote Macbeth and during the reign of Queen Elizabeth 1st. Despite the age, not much has changed for example his advice to plant carrots in sandy soil still stands today although his wacky suggestion for stopping pests of ‘burying the head of a donkey’, might be less popular! 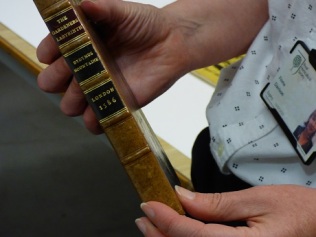 There was other really interesting stuff too;

On the top floor there was a sculpture of Joseph Paxton. I know a bit about him ‘cos there’s a lot of info at Chatsworth about the time he was head gardener. I know he designed and built the glasshouse that housed the giant water lily. In order to test his idea of a glasshouse structure, he had his daughter stand on the lily pad leaf to see if it would hold her weight. Carol Klein explained how the glasshouse was designed to have the glass overlapping, inspired by the lily itself.  I’ve just been to Chatsworth and read all about how the glasshouse had to be destroyed during the war as they couldn’t afford the fuel to heat it up. The foundation of the glasshouse is where the maze stands today.

To fully understand the work of Capability Brown you need to go to a place where he worked and what better place to visit then Chatsworth House, where he totally transformed the landscape there. We visited recently and took photos of the info boards there:

This wraps up my RHS Ambassador lunch, I had a great time. The lunch helped me understand my job as an Ambassador and the library tour gave me a really good understanding of  the history of garden design and landscaping – it all helps me think about getting a job in horticulture one day.

I’ve had another busy week at school and I absolutely can’t wait to tell you what I’ve been up to.

I’ve got some great news as I was announced as ‘Kids Blog Star of the Week’; which is a great achievement for a young blogger like me.

My blogs in the coming week will be all about…….