Calm before the storm !!

With SAT’s around the corner (first test tomorrow), I’ve ditched the practice papers, ripped up the ‘rithmatic and binned the books – it’s time to have fun, doing a few of my favourite things….

…..chopping wood, lighting fires, eating (Jaffa cake) s’mores, spending the day at Chatsworth, wildlife spotting, getting into the garden (of course) and enjoying the sunshine!!!

School is pretty tough at the moment so when the day is over I’m doing all the stuff that chills me out and makes me feel happy.

At home we ‘chucked’ a BBQ together, which I lit with my fab fire steel. After our grub, I whittled a stick into a wand, turned the BBQ into a fire with sticks from the garden and I toasted marshmallows to make into s’mores, using Jaffa cakes for a change – they were D.E.L.I.C.I.O.U.S !!! 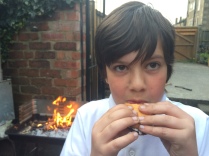 Wildlife spotting of the week!

Me and my Mum had a quick drive over the moors after tea on Friday; there was an awful lot of road kill and fortunately some live stuff too !! We saw grouse, meadow pipits, lapwing, kestrels and the wildlife spotting of the week/month or maybe year……a short eared owl. We were driving along and I thought I saw a buzzard, but as we got closer the markings were a bit strange. As it turned around I saw that distinct dome shaped head and big wings. We saw it glide gently over the moors and ‘bang’, it dived into a small valley; it was obviously hunting for food. Oh my days I was overjoyed!!

The best place in the world, Chatsworth House

There’s one place that’s sure to make me feel calm and it’s Chatsworth House. I’ve said this before, but it’s my very favouritest place in the world! We dropped my Dad off with his road bike at Peak Forest and me and my Mum drove up to Chatsworth. It was so early that there was a mist over the river, it looked spectacular.

We enjoyed a hot chocolate before walking over the bridge and following the river checking out all the wildlife. I saw mandarin ducks – their colours are just amazing, they almost look tropical – herons, little grebes, sandmartins, housemartins, small waders and weirdly (in the daytime) a bat! At first it was a little cool, but it soon got warmer, so I had to take a paddle in the river. We found this amazing piece of drift wood that almost looked like deer antlers, so we carried it all the way back to the camper van and brought it home, where we put solar fairy lights – it looks like a fancy sculpture!

After lunch we were just thinking about what to do next when Steve Porter, the Head Gardener at Chatsworth got in touch, as he had seen we were there via Twitter. I had worked on the Dan Pearson Garden, up at the trout stream in December when it was absolutely pouring down with rain, Steve invited us in to see how the garden looks now; we were in quicker than you can say “Duke of Devonshire”!!! 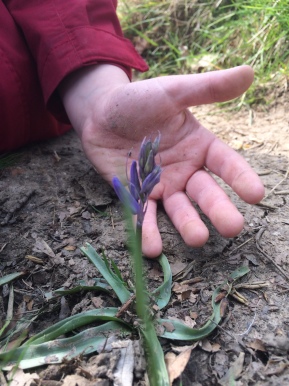 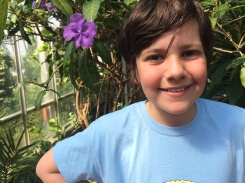 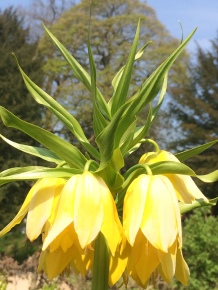 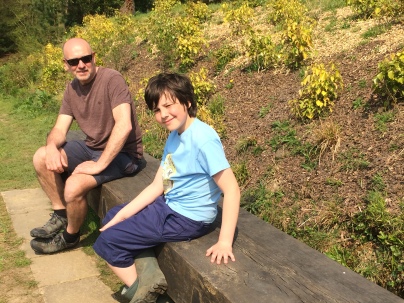 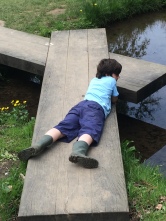 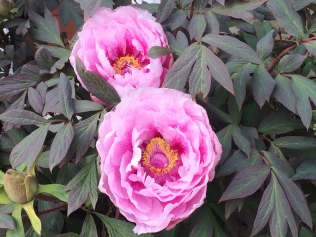 We wasted no time and headed straight to the newly re-instated Dan Pearson Garden and what a joy it is. I’d been blown away when I saw it at RHS Chelsea Flower Show last year, then I’d had the chance to work on it when I did my dream day in December, so to see it now, freshly planted is brilliant. It’s a gardener’s delight, it blends in so well in that area of the garden; it’s just wonderful. Steve invited me back in Autumn to do some further planting in that area and I can tell you, “I can’t wait for that!”

Here’s a quick video of what I thought of the garden:

There’s an official Chatsworth video of the garden build on their Facebook page or better still visit yourself !!

Chatsworth never fails to surprise, as we took in an area we had never visited before, the Pinetum and on a sunny day it felt like paradise! The views were amazing and it was such a tranquil spot. It’s hard to tear yourself away and all 3 of us were running out of steam as we left, but we still had enough energy to visit the farm shop for a few cheeky purchases for tea !!! What a TOP day!

We’ve really made progress in the garden these past few days; I’ve helped to: 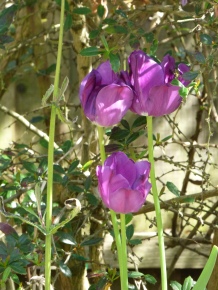 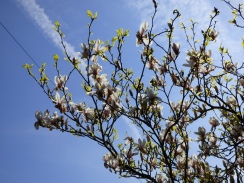 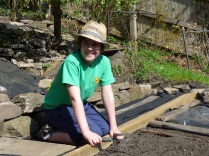 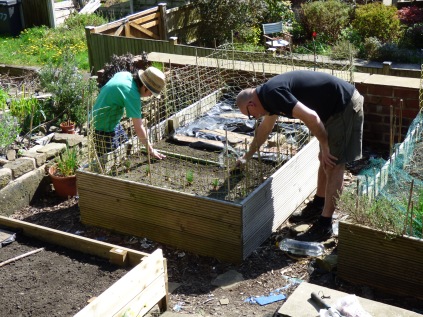 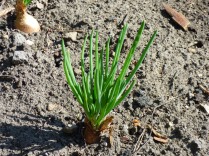 Here’s a short video of me planting herbs and flowers in a container, donated by Lesley at Heyrod Village Stores

On Sunday afternoon, I visited Sarah’s (my gardening teacher), where I helped to clean out the chicken pen. Then I played on the trampoline and got very wet filling the paddling pool. 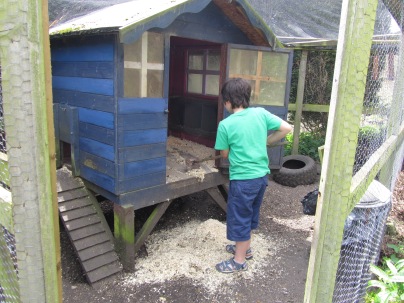 Here we go it’s SAT’s week – good luck to all my mates and no offence, I can’t wait til they are over !

6 Responses to Calm before the storm !!